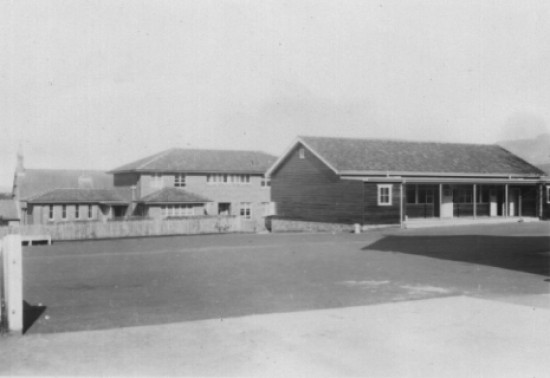 Since 1904, St Columbkille’s Catholic Primary School has provided an education, founded in a Catholic ethos, for the children of Corrimal and surrounding suburbs.

From humble beginnings in an enclosed verandah of a cottage in neighbouring Midgley Street, the Sisters of St Joseph of the Sacred Heart of Jesus opened their first school in the April of 1904 under the direction of Sister Rosalia. At various times, the children were taught in a wooden building, which was added to several times, this was the original parish hall.

When the classes became very large in 1954, Monsignor Downey rented the Church of England Hall, enabling Sister Joseph Phillip to teach there. This continued until 1960 when the main School building was opened. The southern extension was completed in 1968 and 2008 saw the completion of the refurbishment of the entire school. In 2010, the Convent was demolished to allow the construction of the Monsignor Downey Hall, which was blessed and opened by Father Graham Schmitzer on July 22nd 2011.

Alongside Religion and the ‘3Rs’, the Sisters were also renowned teachers of Music, having as many non-Catholic pupils as Catholics. They organised a major concert each year and the parish archives state "...professionals couldn’t do better".

In addition to infants and primary students, the Sisters taught the senior girls until 1966 when the Josephite secondary school for girls, Holy Cross College, opened in Bellambi. In 1983, Holy Cross College amalgamated with St Paul’s College (until that time it was a boys only school) to become the present-day co-educational Holy Spirit College.

The last religious principal of St Columbkille’s was Sister Kerry Gardiner, who remained until the end of 1993, when Mr Michael Connelly took up his appointment as the first lay principal in January 1994.

Today, St Columbkille’s is staffed solely by lay-people, and while times have certainly changed, the legacy of these pioneer women lives on. The staff continue to hold at its core, the impetus of the foundress of the Josephite Order, St Mary of the Cross MacKillop. She believed that the need to educate the children of the poor, be they spiritually, emotionally, academically or financially so, was to be the prime motivator.

Our school’s vision, ‘Learning together, Shaping futures’ reflects both this and the words of St Irenaeus, “Man fully human is God’s greatest glory”.

Read more about What We Offer at St Columbkille's and Take a Virtual Tour of our school.

A Catholic School in the Diocese of Wollongong

Catholic schools have a long and proud history in the Australian educational landscape. Originally established by orders of brothers, nuns and priests in the nineteenth century, they are now almost entirely staffed and led by lay people.

Catholic systemic schools in the Diocese of Wollongong are either parish primary schools like St Columbkille's, or diocesan secondary or K-12 schools. They are all co-educational schools. (The Diocese also has another seven independent congregational secondary schools, some of which offer single-sex education.)

Catholic schools have a unique character because as well as being places where learning is highly valued, they are places where priority is given to a values-based education in the Catholic faith. This involves all staff and students proclaiming the Good News of Jesus Christ to the world. Staff identify strongly with their school and take pride in their work and the school’s achievements.

Take a Virtual Tour of Our School